He will speak on the topic: The Right to Be Heard–Jews, Human Rights, and Global Democracy.

Admission is free and open to the public.

Loeffler is a professor of history and Jewish studies at the University of Virginia, and a former Robert A. Savitt Fellow at the Mandel Center for Advanced Holocaust Studies of the United States Holocaust Memorial Museum.

In his talk, Loeffler will draw from his new book, Rooted Cosmopolitans: Jews and Human Rights in the Twentieth Century (Yale University Press, 2018), to discuss the 1948 moment in which modern human rights was born.

2018 marked the 70th anniversary of two momentous events in history–the creation of the United Nations’s Universal Declaration of Human Rights, and the birth of the State of Israel–which both took place during a time of crisis for global democracy.

Today those events are still entwined, with ongoing debates about the Israeli-Palestinian conflict, global antisemitism, and American foreign policy. 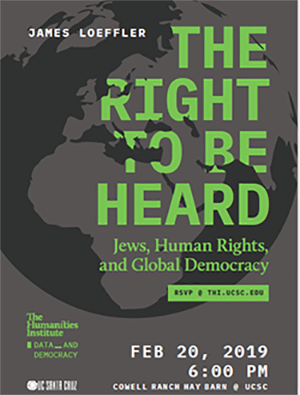 Loeffler will revisit the history of the modern Human Rights movement and examine the relationship between the Holocaust, the legal framework of Human Rights, and the struggle to find justice on a global scale.

His lecture will also address the challenges and opportunities for minorities and stateless peoples by focusing on Jewish human rights pioneers who saw the Jewish state as an expression of global democracy.

His first book, The Most Musical Nation: Jews and Culture in the Late Russian Empire, won eight major awards and honors, including from the Association for Jewish Studies, the Sami Rohr Prize, and the ASCAP foundation.

His other writings include essays on East European Jewish history, the antisemitism of Richard Wagner and Frederic Chopin, the history of klezmer music, American Jewish politics, the origins of Israeli popular song, the memory of the Holocaust in Soviet Jewish culture, and the history of international law.

A trained pianist and musicologist, Loeffler has consulted for National Public Radio, the Center for Jewish History, Carnegie Hall, and numerous other cultural institutions. For 10 years, he served as scholar-in-residence for the Pro Musica Hebraica concert series at the Kennedy Center.

Before that, he directed the Former Soviet Jewish Community Cultural Initiative at the Center for Traditional Music and Dance in New York City and worked at the YIVO Institute for Jewish Research and the Jewish Music Research Center at the Hebrew University of Jerusalem.

He also contributed the liner notes to the Grammy-nominated album The Zemiros Project (Traditional Crossroads, 2000).

Loeffler is currently working on The Law of Strangers, an edited volume of articles about Jewish lawyers and international law. His writings on contemporary Jewish and legal affairs have also appeared in the New York Times, the Washington Post, the Wall Street Journal, Tablet, and Slate.

This year, the event is also being presented as part of the The Humanities Institute’s Data and Democracy initiative, a project of the Expanding Humanities, funded by the Andrew W. Mellon Foundation.

A public reception will follow the lecture. RSVP is requested. For more information, contact thi@ucsc.edu or call 831-459-1274.

This story was originally published on the UCSC NewsCenter on February 13, 2019